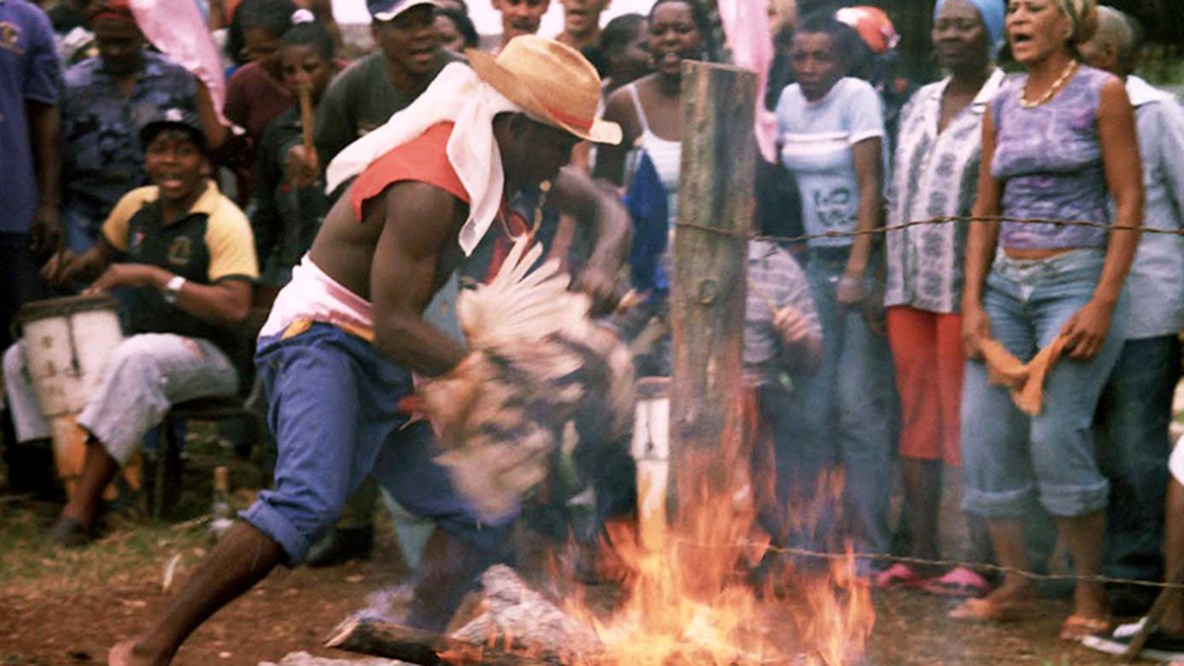 Arturo Sotto’s “Breton is a Baby” is a discursive documentary which explores a subject you don’t often hear discussed in relation to Cuba – its sheer strangeness. Titled partly as a joke around Andre Breton, the French poet who founded the movement in 1924, the films’s premise is that “Surrealism is part of Latin America in a highly organic manner”, and after watching this film, you won’t disagree. While many commentators on the island might have stressed how rational – if not scientific – The Revolution, and Cuban Socialism are trying to be, in this film the irrational erupts in the best surrealist manner, whether from the Santeria rituals mixing Catholic and Yoruba practices, which have grown in the island from their roots amongst Afro-Cuban slaves, to the heroic legacy of Ubre Blanca, the cow with record-breaking milk production yields who was held up as an emblem of the island and the evolutionary superiority of the Revolution – a space where Socialism, science and the surreal intersect. In a further twist the film could not have anticipated, this fabled, now preserved bovine of legend would lend her name to a very good cult Glaswegian electro group.

Perhaps the links with surrealism are simply Latin; many have noted how strongly the absurdities of Spain, and some of the rituals associated with that country, haunt the work of the most celebrated of surrealist filmmakers, Luis Bunuel. And Bunuel himself would comment on the international nature of the movement; “More than anything else, surrealism was a kind of call heard by certain people everywhere, in the United States, in Germany, Spain, Yugoslavia – who, unknown to one another, were already practicing instinctive forms of irrational expression.”

In fact, the surrealists had themselves tried to map the world, in 1929, in a special edition of the Belgian periodical “Varietes”. The map is a brilliant parody of the importance that certain countries gave to themselves, further distorting the distortions provided by the system of Mercator projection, where, for instance, The U.K. is represented as being the same size as Madagascar, whereas in reality, the former is half the size of the latter. Meanwhile, on the surrealist map of the world, a large Ireland completely dominates a comically shrunken British Isles.

Even more pointedly, while the U.S. has been ‘disappeared’, Mexico has grown disproportionately to complement North America with Canada and an enormously inflated Alaska, although the rest of Latin America is unfortunately dwarfed too.

It is often forgotten that Surrealism was an inherently political, if not avowedly revolutionary movement, and the purpose of the map, understood to be drawn by Paul Eluard and informed by his horror at colonialism, wasn’t to rank countries but to undermine and destabilise notions of nationality in the first instance. As the Surrealist Manifesto had announced in 1925; “ Even more than patriotism – which is quite a commonplace kind of hysteria, though emptier and shorter-lived than most – we are disgusted by the idea of belonging to a country at all, which is the most bestial and least philosophical of the concepts to which we are all subjected.”

Nevertheless, we are all assigned nationalities according to where we are born, although many of us may rebel against them, and identify with other nations. One such character was Alejo Carpentier, who although being born in Switzerland, to French and Russian parents, would grow up in Cuba and identify as fiercely Cuban, going on to force Cuban literature to European attention, and become arguably the country’s most influential writer. Indeed, it was assumed that he had been born in Havana, until his birth certificate awkwardly turned up.

Carpentier would find a literary method in which to describe the unique experience of Latin America, one which he would term ‘marvellous realism’, kicking off a Latin American literary boom picked up on in Europe – he maintained strong connections with Paris – that would become more commonly known as ‘magic realism’. It’s not insignificant that while he may have been fully bilingual, it was always noted that he spoke Spanish with a pronounced French accent, and this could in a sense be said of his literary production also.

Carpentier had begun investigating Afro-Cuban history and incorporating it into his writing  while living there under the dictatorship of Machado. After being jailed for writing a manifesto against the regime, he managed to escape to France with the aid – and on the passport of – surrealist poet Robert Desnos, who would introduce him to the ideas and personalities of the surrealist movement. After Machado fell, Carpentier would return to Cuba, feeling himself unable to contribute in any significant manner to French Surrealism, but with an understanding of the possibilities of the movement when allied to a new, suitable, subject – Latin America. “Using one’s most spontaneous language, listening to that which sings in the most intimate aspects of one’s being” was, for Carpentier, the main lesson he would apply from surrealism, to describe what he regarded as the baroque, hybrid culture of Latin America. He would become particularly interested in the legacy of Santeria, and of colonialism, which would lead to his breakthrough novel “The Kingdom of This World”, a hallucinatory satire on the Haitian Revolution and its aftermath.

Carpentier’s interest in Afro-Cuban culture would also inform his groundbreaking work on  musicology on the island, and its ethnographic roots. Surviving another dictator, Batista, he would fully endorse Castro and the Revolution, but write another novel examining the effects of a past revolution, his most famous, “Explosion in a Cathedral”, which would prove a massive influence on Gabriel Garcia Marquez, and change the course of Latin American literature.

Although surrealism was initially a literary movement, and its arch ideologues and manifesto writers were poets, it is most closely identified with the fine arts, and here too, Cuba excelled, in the form of Wilfredo Lam.

Unlike Carpentier, Lam was actually Cuban, though one of Chinese descent on his father’s side, and both coloniser and colonised import on his mother’s side – she was the descendant of Spanish Conquistadores and African slaves. Like Carpentier, he would find his style in Europe, in connection to and conflict with surrealism. He would be inspired by Bosch and Goya while in Spain, and fight for the Republicans in the Spanish Civil War. However, while his style was a perfectly competent, technically assured riff on European modernism, it was in Paris, and through a meeting with Picasso, that his mature style would emerge. While Lam would be influenced by Cubism via Picasso, Picasso and, of course Cubism itself, had been deeply influenced by African art – the greatest rupture in early 20th century art, Les demoiselles d’Avignon, is of course heavily indebted to African masks in particular  If some of Lam’s earlier works in this new style are rather rudimentary, his style would reach its fruition on his return to Cuba, fleeing the Nazis, in 1941.

Lam would say of his brush with surrealism: “surrealism gave me an opening, but I haven’t painted in a surrealist manner.” Like Carpentier, it would be his reemergence in Cuban culture that would open the floodgates for the irrational, in Lam’s case a direct connection with Santeria, his godmother Matonica Wilson having been a priestess in the religion, with a reputation as a spiritual healer. Lam would also visit Haiti, where he witnessed Voodoo rituals firsthand, where the faithful were possessed to spirits. He would go on to incorporate archetypal images from these religions, in a stripped-down style inherited from Picasso but taken back to source, depicting such fantastic creatures bridging the divide between the supernatural and the earthly, human and animal, even woman and horse.

His most well-known painting “The Jungle” is a perfect bridge between European modernism and Afro-Cuban tradition. Painted in a fractured style with a shallow but faceted picture plane, depicting a mixture of highly stylised human and equine forms in a sugar cane plantation, with exaggerated sexual organs blending into the vegetation, the painting is simultaneously evoking the island’s history of slavery and Santeria myth. In the painting’s most realistic, and jarring passage, a pair of scissors hangs above the scene to confront the viewer. Lam would claim of this and other works that he ‘tried to relocate black cultural objects in terms of their own landscape and in relation to their own world.”

Intellectually, he would align himself with Aime Cesaire, the Martinican poet who would be the first major writer to explore the Afro-Caribbean identity in the aftermath of colonialism, and founded the highly influential negritude movement. This would further impress on Lam the importance of treating Afro-Caribbean culture seriously, from a black point of view, and avoiding superficial exoticism.

However, unpredictably he didn’t get on with Batista, some of his paintings even being read as critiques of the manner in which the island was being turned into a floating brothel for American tourists, and would shelter in Italy, by now the most famous black artist in the world, and the first to be taken seriously on his own terms.

Lam wouldn’t return to live in Cuba, although he endorsed the Cuban revolution, and would frequently visit, painting a late masterpiece, “The Third World”, for the presidential palace.

Lam is someone who seems even more relevant  now than he did in his lifetime, in that his work embodies the contradictions of colonialism, and exemplifies black artists’ struggle to be heard, and their culture recognised. As he stated, “my painting is an art of decolonisation, not in a physical sense, but a mental one.” Indeed Lam, with his multicultural, diasporic identity, although ultimately and uniquely Cuban, might fully embody the personality of someone representing the surrealist map of the world, and its disdain for nationalism.