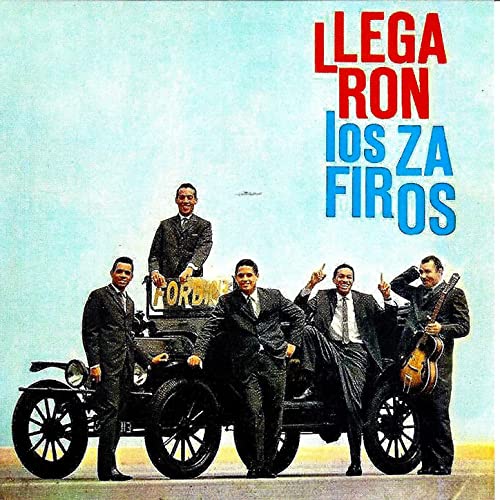 Cuban music is justly famous worldwide, and arguably the country’s greatest export, one that can effortlessly transcend any cultural embargoes, no matter how petty or arbitrary. The island is renowned for its diverse musical genres, which have cross fertilised other genres in the states and elsewhere. However, the musical influence of Cuba’s largest neighbour has also been felt on the island, nowhere more so than in Cuba’s own unique, massively popular variant on doo wop, Los Zafiros. Formed in 1962, so already slightly out of time, this multiracial close harmony group would dominate the Cuban charts for fifteen years before multiple breakups, deaths and reunions years later, providing a fascinating subject for the documentary, “Los Zafiros – Music From the End of Time.”

The most Americanised of Cuban bands, taking their sounds and moves from classic doo wop, but with rhythmic eruptions of rumba or bolero to bring them back to their Latin American roots, they would be loved by young Cuban audiences who felt they were the closest the island had to American rock groups, or British beat groups. One commentator describes them as “world music before world music was world music” – and before that term became passé. Certainly, they could play Moscow on the same bill as The Beatles, and get as big a reaction, though they never actually met the Fab Four. Except in the mind of the honey-voiced El Cholo, who was losing it to alcohol, big style.

Ultimately, their music speaks louder than words, and the film wisely ends on footage of them performing the sublime Mi oracion (My Prayer), which (spoiler alert?) you can watch here:

Ahead of Havana Glasgow Film Festival’s (HGFF) screening at CCA, we spoke to the film’s director, Lorenzo DeStefano, about the group and his film.

HGFF – How did you discover the music of Los Zafiros?

LDS – I have been traveling to Cuba since 1993, when I directed an American play for the Festival de Caribe in Santiago de Cuba. I was there most recently in December 2016 for the premiere of my latest music documentary, “HEARING IS BELIEVING” (www.hearingisbelievingfilm.com).

As a photographer I covered the islands between 1993 and 1998 for a project called “CUBANOS – ISLAND PORTRAITS”, now in the Permanent Collections of MOLAA – The Museum of Latin American Art in Long Beach, California and in the University of Miami’s Cuban Heritage Collection.

It was in 1999 that I came upon the album, “BOSSA CUBANA”, a collection of Los Zafiros hits from the 1960s that was released by World Circuit Records, the UK record company that brought “Buena Vista Social Club” to the world, also in 1999. This record was found at the Center for Cuban Studies in New York, run by my friend Sandra Levinson, who later became one of the Executive Producers of my film, “LOS ZAFIROS-MUSIC FROM THE EDGE OF TIME”. Not being a particular fan of 1950s Doo Wop music, I was nonetheless entranced by the amazing blending of American and Cuban forms. The story that was revealed in the liner notes, about there being two surviving members of the group, intrigued me. Perhaps there was a great musical and personal story here, waiting to be explored.

It took a year to secure the cooperation of the families of Manuel Galban in Cuba and Miguel Cancio in Florida, and to line up the many important interviews and musical collaborators we would later work with when we shot the film in December 2001 in Miami and Havana.  The film had its world premiere at the Festival Internacional del Nuevo Cine Latinoamericano de La Habana in 2002.

HGFF – One aspect that comes across vividly in the film is how deeply they resonate with Cuban people. Why do you think this is?

LDS – As someone born and raised in Hawaii, I came away from the experience of making this film with the feeling that as island people, Cubans felt a very special bond with this group of young men who came from obscurity and through their natural talent and interaction with top Cuban musicians and composers, rose to prominence way beyond what their early lives would indicate was even possible for them. Their rise and their fall embodied a very dramatic look at the kind of fame offered to so few and the price to be paid for such notoriety. As there is in Hawaii or any other “home town”, there was also a tremendous pride in the groups accomplishments outside of Cuba, primarily in Europe and in Russia where they toured with many other groups in the famous “Grand Music Hall of Cuba” cultural export programs. As shown in the scene in my film that is among people’s favourites, a group of older and younger people in Havana’s Parque Trillo are listening to the tribute group, Los Nuevos Zafiros, perform  an old Los Zafiros hit, “Un Nombre de Mujer”, with Manuel Galban and Miguel Cancio singing along. Everyone in that crowd, elders and children as young as eight, knew the song by heart, passionately sang the lyrics along with the group. This was the moment I realized the lasting influence of Los Zafiros and how much they are still loved by the Cuban people.

HGFF – Los Zafiros are interesting in that they incorporate an American genre – doo wop – into Cuban music. How common was this? How does this sit with the American influence on the island in the late 1950s?

LDS -With the window of free cultural exchange closing soon after the Cuban revolution in 1959, there is a kind of frozen-in-time feeling about the kind of American musical influences that inspired Los Zafiros. The Platters, The Moonglows, Frankie Lyman and the Teenagers, the Four Tops and other American vocal group harmonizers really connected with the co-founders of Los Zafiros, Miguel Cancio and Leoncio “Kike” Morúa. When they brought in Eduardo Elio “El Chino” Hernández, Ignacio Elejalde, original musical director Oscar Aguirre de Fontana, and the later musical director Manual Galban, this interest in blending these Norte Americano influences with traditional Latin and Caribbean forms like Son, Afro-Cuban, Rhumba, Calypso and Bossa Nova really took off.

HGFF – One person you interview says that Los Zafiros were like a Cuban Beatles. How much do you think they conveyed a rebellious spirit of youth? How far was this possible in Cuba in the 60s?

LDS – I heard this term early on in my research into Los Zafiros. It’s always problematic to compare groups like this, especially to the Beatles, who exerted unrivalled musical and cultural influence. However, in this case I think there is some merit to the idea that, at least in Cuba, the youthful enthusiasm and extreme natural talent of the five members of Los Zafiros caused similar adulation, especially among female fans. As the famous Cuban composer Rolando Vergara says in the film, the men wanted to be like them and the women fell in love with them, sometimes chasing the boys with scissors to cut off a lock of their hair as a memento. That sounds to me like the kind of reaction the Beatles elicited from their more ardent fans. In short, hysteria.

HGFF -The band also incorporate more traditional Latin forms such as rhumba into their music. How do you think they balance these influences?

LDS – As I said before, Los Zafiros worked the pop music zone to perfection. They knew their audience was mostly the Cuban public, people who had just gone through a world-shattering revolution a few years before. As mass audiences do, they needed enjoyment, celebration and distraction from the uncertainties facing a new and radically different kind of republic. Los Zafiros provided these in a way I’ve always found ironic, since by the early ‘60s America was clearly an “enemy of the people”. Yet it was American music that was still among the most popular in Cuba through bootleg records and international radio broadcasts. It’s another case of what is forbidden by a government becomes an obsession with its people.

HGFF – Do you have a favourite Los Zafiros song?

HGFF – Are there any other documentaries on Cuban music you can recommend?

LDS – Wim Wenders’ “Buena Vista Social Club” stands out as having introduced traditional Cuban music to the world in a very big way. Manuel Galban later joined this super group in the 1990s and recorded a great guitar album with the famous American guitarist Ry Cooder called “Mambo Sinuendo”, which won a Grammy in 2004 for Best Pop Instrumental Album. “Great Day in Havana”, the 2001 documentary by Laurie Ann Schag & Casey Stoll, is also a standout film about musicians and artists in Cuba. “Unfinished Spaces”, the 2011 documentary about Cuban architecture by Alysa Nahmias & Benjamin Murray, is a very important film, as is “Havana-The New Art of Making Ruins”, the 2006 documentary by Florian Borchmeyer.  “Yo Soy Cuba”, the remarkable 1964 film by Russian director Mikhail Kalatozov is a justly famous experimental depiction of life in Cuba in a highly cinematic and impressionistic way.

Tickets to see Los Zafiros – Music From the Edge of Time at the CCA in Glasgow at 2.50pm on Sun 21 Nov are available HERE