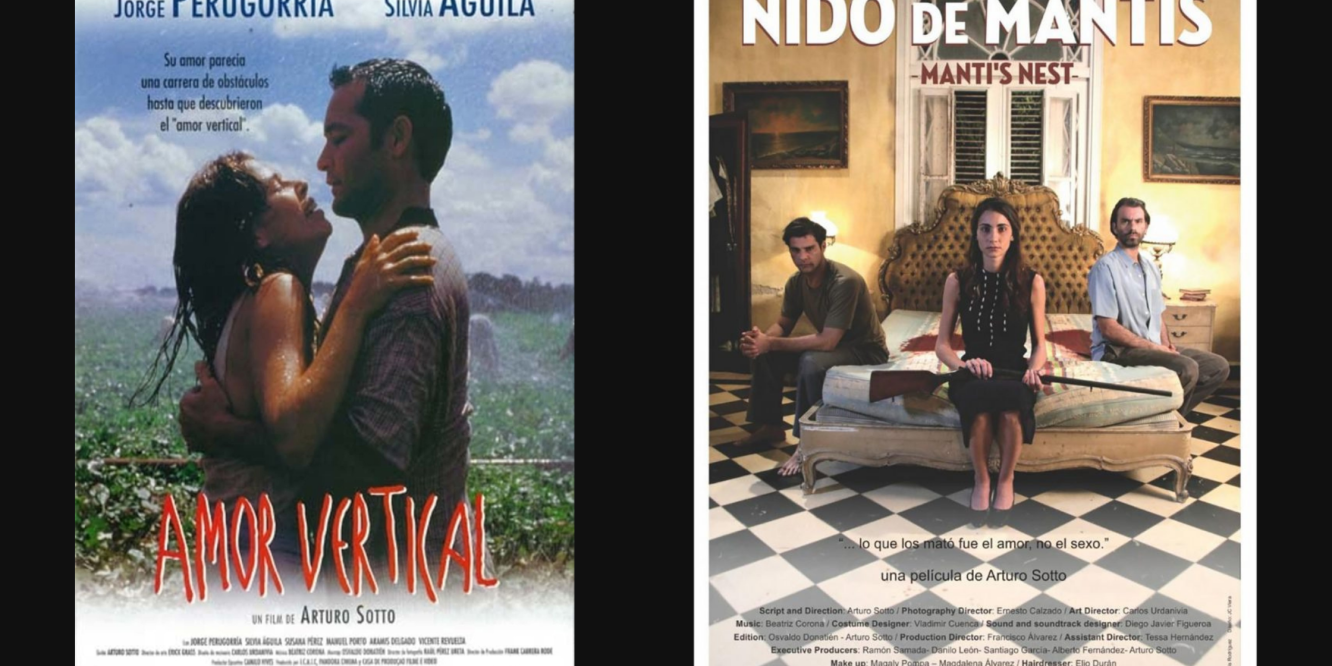 This year, Havana Glasgow Film Festival will be dedicating Saturday 20 November to the films of Arturo Sotto. The screenings kick off with Amor Vertical (1997), a comedic film starring Silvia Aguila and Jorge Perugorria which tells the tale of a young couple’s misadventures, enveloped in a frenzy of passion and lust, which eventually turns to love.

The screenings come to a close with El Nido de Mantis (2018), the story of a young woman accused of murder who – through a tale of passion, love, and jealousy about her mother’s life – attempts to prove her innocence.

Nevertheless, both films also display common themes which let us trace the continuities in Sotto’s work. In both, we see characters wanting to flee a society which entraps and stifles them. Critiques of the Cuban state and its bureaucracy may be more self-evident in Amor Vertical, but in El Nido de Mantis, through flashbacks, we see how the residents of the small Cuban village Siboney forbid Elena from physically leaving. Love may vary in meaning and form in each film, but in both, love is transgressive and in opposition to the status quo.

The ever-lingering presence of the USA is also felt in both films. El Nido de Mantis is set during the 1994 migratory crisis with the US, although the possibility of escape to, and harm from, the nation is felt throughout the film. Through early flashbacks, we see counterrevolutionaries flee to the hegemon to the North in the direct aftermath of the Revolution. The protagonists also live through the Bay of Pigs invasion and the effects of the embargo. In sum, we see the complex and uneasy US-Cuba relationship played out through the life events of the film’s characters.

In Amor Vertical, conflicted and contradictory feelings towards the USA are represented through a surreal and humorous conversation between the two conjoined twins – an exchange that comes to represent the mentality of the Cuban nation. To stay or to go? It is an unremitting dilemma also exemplified by the protagonist’s mother and her failure to actually leave the island despite the constant visa approvals.

However, what both films have most in common is their ability to let audiences embark on their own journey of escapism. In Amor Vertical, we experience an absurd, comical world where the characters eventually have to resign themselves to the realities of the new Cuba. In El Nido de Mantis, we take a journey to the past and experience Cuba’s momentous historical events alongside the characters. Through very different tones, both films are powerful evocations of passion, love, and the uncertainty of coming to grips with the constraints of ‘the real world’.

Amor Vertical will be showing at 1.30pm and El Nido de Mantis at 8pm on Saturday 20th November at the CCA and online.