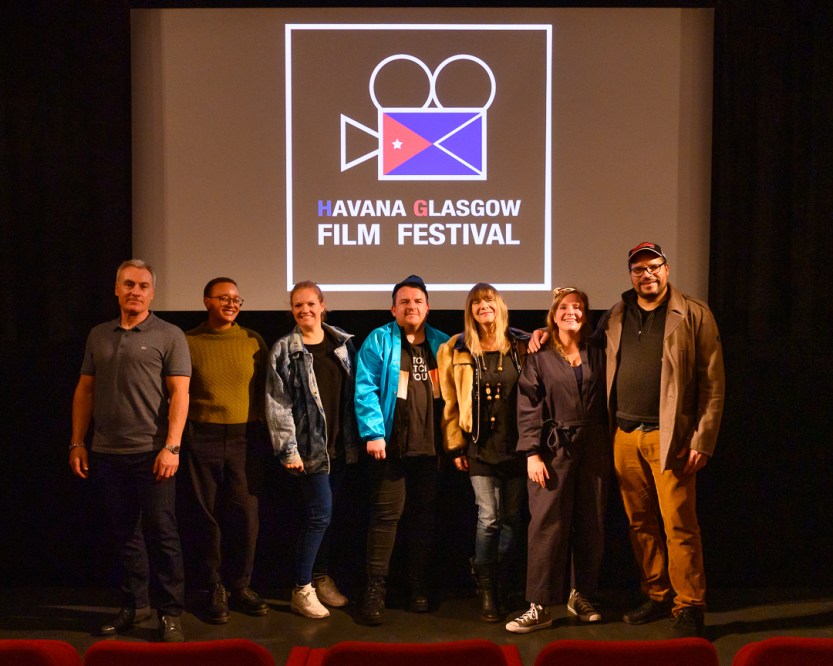 The festival celebrates local identities and cultures, highlighting the similarities between Havana and Glasgow and the thriving artistic talent that exists within both cities.

Our eighth Havana Glasgow Film Festival,  running  from 8-13 Nov 2022,  will screen the best Cuban documentary, feature and short films , facilitate discussions and host dynamic cultural events, hopefully both in-person and online. We have unique access to Cuban films  in the UK through our partnership with the Cuban Film Institute (ICAIC).

This year we focus on black filmmakers and include films by Gloria Rolando, Sara Gòmez and Ricardo Bacallao.

What makes the Festival possible is Eirene’s 23+ years commitment to Cuba, her strong relationship with the Cuban Film Institute (ICAIC) and long term working partnership with Hugo Rivalta.

A screenwriter and director, her debut feature ‘Day of the Flowers’ (shot in Cuba) was screened at Edinburgh Film Festival and Havana’s International Film Festival. Her feature documentary, ‘My Life is Dance’’ is in post production.

Eirene has been invited to be on the documentary panel for HGFF partner festival The International Festival of Gibara (FIC Gibara) where she has also given a presentation about Havana Glasgow Film Festival and screened some of the Scottish shorts previously screened at HGFF. She is also a curation advisor.

Connect with Eirene Houston on Linkedin

Based in Havana, Hugo is a top TV writer, filmmaker and journalist. Most recently his series for adolescents ‘Secondary Days’ – 45 episodes – has been shown on Cuban Television. He is also screenwriter of a new horror short film, ‘Rumour’. His original animation feature ‘The Super’, produced by ICAIC, is currently in post production.

A freelance Project Manager in the creative industries and nonprofit sector, Julia has over 20 years experience managing festivals, events and global education projects in the UK and Latin America. She is Co-Founder and previous Director of the social enterprise La Choza Chula on the coast of Guatemala.

Connect with Julia on Linkedin

Dani Acosta is a graphic designer and web developer. More recently he moved into video editing and production. In 2020 he produced the documentary Cuba & COVID-19: Public Health, Science and Solidarity through DaniFilms.

David Sierra is a Colombian videographer, archivist, and an emerging film curator based in Scotland.

Since moving to Edinburgh in 2016, David has worked on a range of films, festivals and archive projects between Scotland and Latin America. He is joining us in 2022 as our New Promoter – a Film Hub Scotland scheme to develop new curating talent.

David is interested in the relationship between memory and cinema, especially the creative ways to preserve, represent and promote historical and social issues through films.

In 2020 and 2021, he was awarded two grants from the Colombian Ministry of Culture to preserve ‘Muchachos a lo Bien’, a documentary TV series about the diversity of young people in Medellín, Colombia, during the 1990s.

Eugenie Theuer – Marketing and Outreach AssistantEugenie is an Austro-Spanish film curator and scholar based in Glasgow. She moved to Scotland for her Masters in Film Curation at University of Glasgow and has worked for various film festivals, including our partners IberoDocs and Africa in Motion (AiM) film festival

As a film curator, Eugenie wants to make room for stories on the margins and voices that are often ignored. She is especially interested in showcasing and supporting the work of women filmmakers.

Dougie Souness is a Scottish photographer based in Glasgow, with a passion for Cuba and photographing the people and landscapes of the country.

Dougie is also well known for his artist management role at music company No Half Measures, who work with the groups Wet Wet Wet, Hue and Cry, Red Sky July and Anchor Lane.  Dougie’s music photography has been used in numerous album releases and publications whilst his underwater, street, and landscape photography has received international recognition.

His images exhibited as part of I See Cuba, HGFF20, a photography collaboration celebrating the 500th anniversary of the founding of Havana with Roberto Chile can be viewed and bought here.