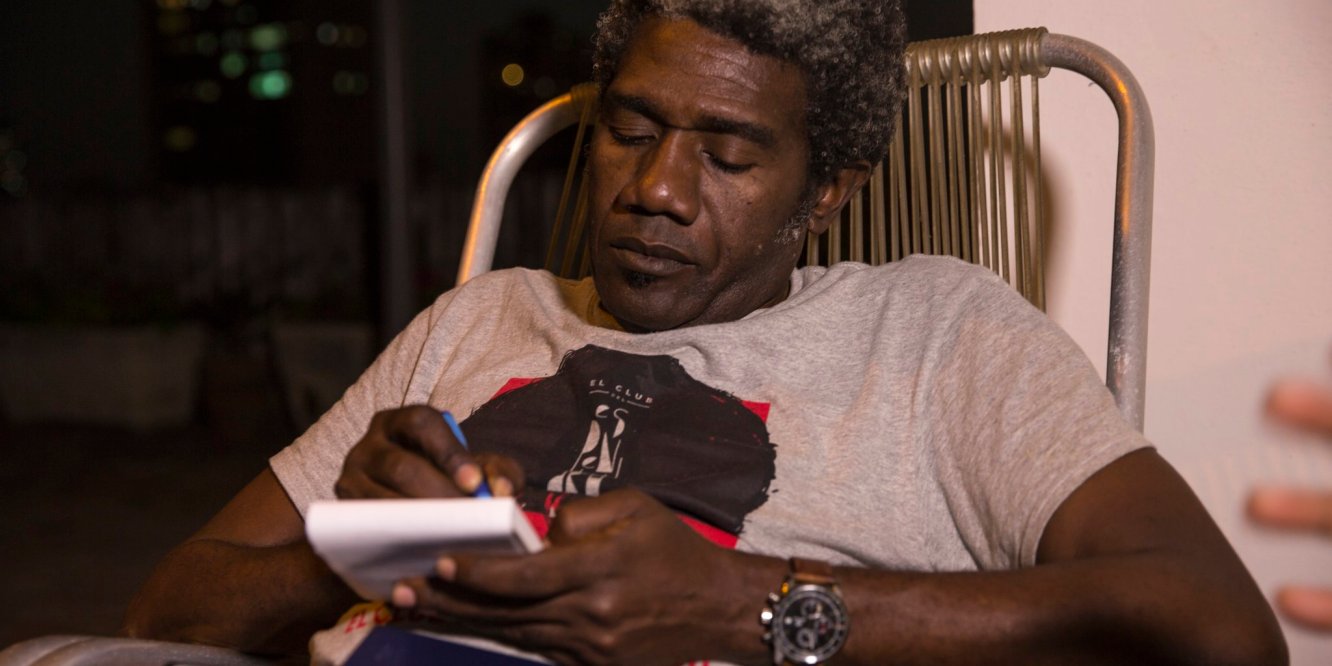 In egalitarian societies, some are of course, more equal than others, and Cuba is no exception.

On the island, inequality is, as elsewhere, often structured around the axis of race. Cuba, however, is a particularly unusual example, since the Cuban census claims the island to have a 65 per cent majority white population, while many who either live on or who have visited the islands are stuck by the amount of Black people who are visible, and feel that they constitute the true majority.

Roberto Zurbano is a Cuban writer, activist and researcher at Casa de las Americas, who definitely believes this to be the case. “I say this because most of the population census in Latin America and the Caribbean manipulate the amount in the next census”, he told us when Havana Glasgow Film Festival invited him over in 2017.  “Cuba is not an exception to this. However, in practice, we know that we are a country with a Black majority which should feel proud of being Black and of affirming its identity in whichever document and in the next census.”

Cuba as a modern country also exists principally as a product of colonialism, its indigenous population largely exterminated in the seventy years following Christopher Columbus’s discovery of the island for the Spanish crown. They believed – erroneously – that the island was saturated with gold deposits, but would soon focus their energies on the cultivation of sugar, which required the mass importation of African slaves to harvest.

Cuba’s colonial history is well-documented, the sugar trade leading to the forced displacement of 900,000 Africans to the island as slaves – to put that in perspective, almost double the number brought to the US. With such a history, it should be no surprise either that the island had a problem with structural racism even after achieving independence, and the freeing of slaves.

Zurbano noted that “when Cuba became independent in 1898 we had already undergone two wars of independence in which an army of Blacks and whites fought together against Spain. In 1898 there were 30 black generals in Cuba. However, the racist ideals of Spanish colonialism, combined with the USA’s racist models (which were brought to the island with the US intervention of 1898-1902) contributed to building the basis of the 20th century’s structural racism in Cuba.”

With the Cuban revolution of 1959, Fidel Castro made a concerted effort to deal with racism. While much progress was made in his effort to define the ‘New Man’, in a speech two years later, he implied that the problem had been resolved; it would be an understatement to call that pronouncement premature. Cuba might not have had, and still not have, a problem on the scale of the US with police violence and incarceration, as Santiago Alvarez’s classic short film Now! revelled in attacking the situation in the States.  However, all was not well at home, and a recent survey by the EU found endemic structural racism, relegating Cuba’s black population to lower expectations in employment and housing, in a situation similar to the one they faced in Europe.

According to Zurbano, “Racism is an uncomfortable theme all over the world and Cuba is no exception to it. In the 21st century there are three public discourses about racism in Cuba: a new academic discourse; the discourse of the more than 20 anti-racist activist organisations in the island; and, third, the discourse that one could call the ‘official rhetoric’. The government now recognises the existence of racism, since Fidel Castro’s speech on the topic in 2005, and it was addressed in the following discussions in the two last Party Congresses, as well as in the current economic and political plans devised until 2030.”

This discomfort has led to Black people who have spoken out being marginalised, and even imprisoned in the past. One of the most spectacular instances of this process can be observed in the career of Nicolás Guillén Landrián, a legendary experimental filmmaker who subtly subverted the propagandistic documentaries he was commissioned to make with sly, satirical jabs at the racial situation on the island. Castro’s observations on the equality of the New Man were none too subtly undermined when you’re watching people perform a santeria ritual with a monitor lizard before a Castro poster, literally under a facsimile of his nose.

In the wake of Black Lives Matter, many countries have been inspired to further investigate their colonial histories, an often painful process which has been no easier in Cuba than elsewhere. Scotland for one seems to be in a double bind about its history, regarding itself as both coloniser and colonised, but elevated in the hierarchy by virtue of its whiteness. All of these factors made it very interesting to revisit Zurbano’s testimony, since Cuba could be equally said to suffer from what we could term this ‘double consciousness’, bur emphatically not in the sense defined by W.E.B DuBois.

When we spoke to Zurbano, he had already lost his editorial post at Casa de las Americas, after publishing an outspoken article on the situation in the New York Times in 2013, one of his most incendiary propositions in the article being that, ““To question the extent of racial progress was tantamount to a counterrevolutionary act. This made it almost impossible to point out the obvious: racism is alive and well.”

Zurbano had called out “the hidden racists who do not recognise, neither on the inside nor on the outside of Cuba, the contribution of Afro-descendants to our societies. I lost my position, but I’ve gained a new perspective to the anti-racial struggle and a considerable amount of solidarity from Black movements in Latin America. I still work as a researcher at Casa de las Americas, and I still work as an activist against racism inside Cuba.”

Zurbano has no regrets, and sees his piece as having pushed the debate forward. “Yes, my article made possible the unmasking of racist positions inside Cuba. Alongside the efforts of other people who are very aware of the issue of race, the article increased the political and social debate in many political and economic institutions where, before, the issue of race was not present. However, this process must continue, we still have a long way to go.” While Afro-descendants may have been excluded from certain sections of Cuban society, such as politics to a large degree, or the lucrative tourist industry, they have excelled in the arts, particularly music. Indeed, all of the forms of music that we traditionally associate with Cuba, from the mambo to the rhumba to salsa, have their roots in Black music that fused with Spanish influences in manner similar to Santeria’s fusion of African religions with Catholicism. Alejo Carpentier would note this as early as 1946 in his groundbreaking study Music in Cuba, where he noted that “mestizo and black music… the rich material has an incredible wealth to it… to make it the work of national expression.”

Black Cubans’ contribution to the cinema of the country is less appreciated, but also extremely significant. When I asked Zurbano to give me a list of notable films on the subject, it was a long one. “I could recommend the films of the Afro-Cuban filmmakers Sara Goméz, Nicolás Hernández Guillén and Sergio Giral, from the 60s and 70s. In the 21st century, we should watch documentaries and fiction features by Gloria Rolando, Rigoberto López, Jorge Fuentes, Jorge Luís Sanchez, and Jonal Cosculluela who directed Esteban (a festival opening film a few years ago).  “There are also directors from Cuban television, like Julia Mirabal who, daily address the lives of Afro-descendants on the screen. There are currently young directors who are also re-writing our national history, like Erik Corvalan who directed the documentary Raza (Race), and Amilcar Ortiz Cárdenas who directed Contra las cuerdas (Against the Ropes).

We’re very proud to be screening the remarkable work of Sara Goméz, some of which we have newly restored, and Gloria Rolando, as well as discovering work by new directors who have emerged since we last spoke with Zurbano.