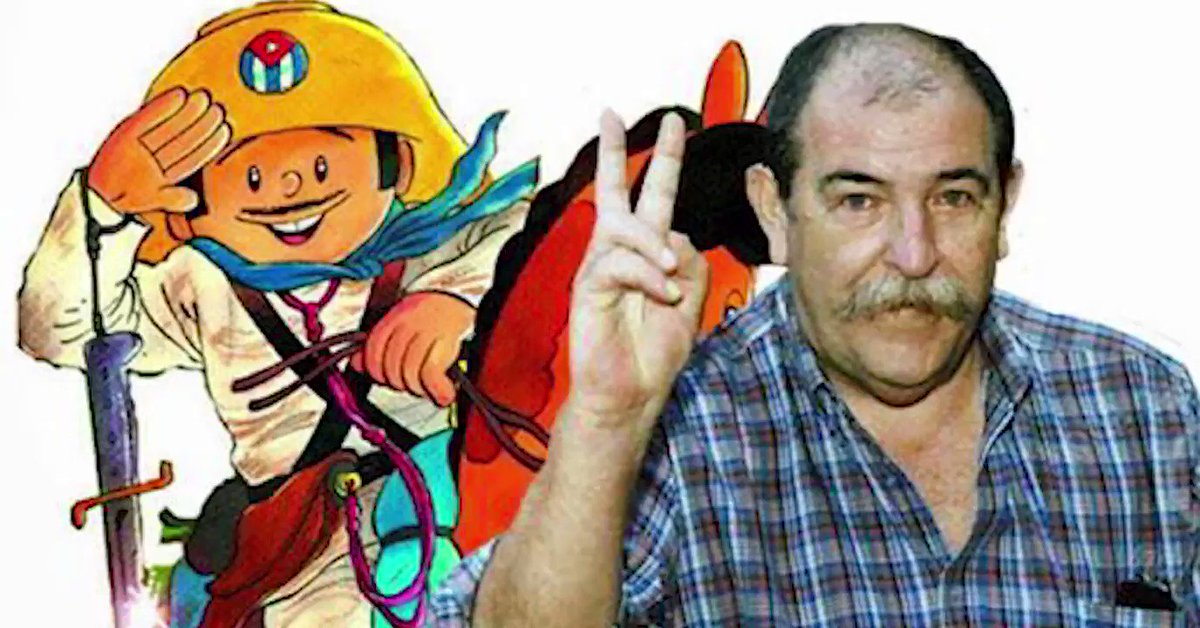 Earlier this year, Cuba was in a state of national mourning for the death of its best-loved animated filmmaker, Juan Padrón. It is difficult to overestimate the importance of this influential figure on the island’s culture – think Disney for the US, or Miyazaki in Japan, even although he never enjoyed the resources of either.

His beloved moustachioed mambi independence fighter, Elpidio Valdés, has enchanted generations of Cuban children, while his irreverent vampire/gangster movie genre mashup Vampires in Havana is one of the most famous Cuban films of the ‘80s, one which firmly placed the island on the international animation map.

With a terrible irony, he died on the exact 50th anniversary of the creation of his iconic character, Valdés.  Even worse, while the nation mourned, members of his family who had moved to the U.S. couldn’t attend the funeral because of the coronavirus situation. Such as his son, Ian Padrón, a filmmaker in his own right whose Habanastation has been popular with HGFF audiences, and who spoke to me about his father.

Juan Padrón had been publishing comics from his teenage years, and learned the basics of filmmaking during military service. Comics would be massive on the island during the 70s and 80s, Ian told me, and Elpidio Valdés became a huge success during this comics boom. While he regrets how this all changed in the ‘90s as comics, and magazines stopped publishing with the economic crisis, known as The Special Period, people loved the old comics, and tried to preserve them.

Elpidio Valdés would be an immediate hit from his first appearance in Pionero, and become one of the most loved characters in Cuban popular culture. A fighter for Cuban independence from Spain during the Wars of Independence of the late 19th century, the character was actually conceived in the Soviet Union, where Juan was living with his Russian wife in St Petersburg.

He told Ian that he had initially been drawing a samurai comic, as he loved Kurosawa and samurai films, then he started drawing a Cuban character who he loved – a mambi – who took over. Juan researched the subject thoroughly and became an expert on this period of Cuban history.

However, as Ian notes, this was no dry history lesson. “The character invoked the Cuban passion for liberty, but my father recreated the war with humour. While in Cuba, they usually invoked the wars with much solemnity, he imbued the history with humour and humanity.”

Within a few years Elpidio made the transition from page to screen, in a series of shorts directed by Juan, which again have proved enduringly popular.

“From the beginning, kids loved the cartoons, and those kids would grow up to become parents and grandparents who would show them to their children and grandchildren.”

While Elpidio Valdés would become the subject of the first animated Cuban feature film, ICAIC believed that Juan didn’t have the experience to make a Cuban animated feature, and that there wouldn’t be an audience for one if he had. In fact, on the film’s release, Juan told Ian that “during the day parents came to the cinema to see the film with their kids, while at night adults went without the kids, and the film became a huge success. This was very important, as it consolidated his reputation as a filmmaker. “

However, it would be his next major film, Vampires in Havana, which would go on to cement his international reputation,

“German producer Manfred Durniok suggested to Juan after seeing his shorts to make a feature about vampires. Juan said he’d already written a script for one, and Durniuk responded, send it to me in a week. Or this month.” Except Juan hadn’t actually written it! He sat locked in his room for a month for a month and wrote the script, inventing a madcap mix of German vampires and American vampire gangsters fighting to find a cure for vampirism set against the backdrop of the Machado dictatorship of the 1930s; fortunately, the producer loved it.

“Juan though that while in most vampire films they were meant to look terrifying, that in fact they’re also victims, really they’re the victims, They can’t go out in the sun, or go to the beach, and they’re forced to drink blood. Juan thought why not feel sympathy for the vampires?”

This progressive attitude towards vampires would prove quite prescient, as modern vampire films have shown increasing sympathy for the former bloodsucking fiends, as well as provide the inspiration for the film’s famously funny punchline.

Another factor in the film’s success is its richly imagined vision of 30s Cuba, including its musical culture. As Ian notes, “One of the best trumpet players in the world, Arturo Sandoval, stood in for our hero, and plays trumpet for the main character – one of the little details that combine to make it such a rich film.”

However, while many might associate cartoons with family entertainment, it’s not really a kids’ film – there’s some spectacularly politically incorrect humour in here.

From the beginning, and partly for this reason, ICAIC lacked confidence in the film – they didn’t organise a premiere, and even considered not releasing it at all.

Juan became depressed, having spent 3 years of his life working on Vampires in Havana, which he knew wasn’t a film just for Cuban audiences, whether children or adults.

Eventually released with no publicity, it became a big word of mouth hit.

“Animated films were meant to be targetted at kids, this was the first Cuban animated film aimed at adults, which was one of the factors that confused
ICAIC; its success vindicated Juan.”

Though kids loved it too; despite having a PG-13 rating, they snuck into screenings.

Ian’s favourites of his dad’s films though are the Quinoscopios, a series of wacky, absurdist shorts he made in collaboration with the revered Argentinian cartoonist Quino. They initially met when the latter was a juror at Havana Film Festival, and Juan was delighted to be his guide to Cuba.  As Ian recalls, “When he went to the airport to pick up Quino and his wife, it was like love at first sight. They made an immediate connection which would see them become best friends.”

Their shared sense of visual humour would make for a seamless pairing, though Ian thinks these films also best reflect his father, who he recalls as a big Monty Python fan and “a very funny but humble, quiet guy“.

Despite, or perhaps because of these qualities, he would continue to be an inspiration to Cubans to this day, through the legacy of his films and art.  “He proved that you can become a national icon, by reflecting on your Latin American heritage but doing it with international acclaim. He grew up with westerns and superhero comics, he loved Spiderman and Superman and cowboys and Indians, but he did something new, and made Latin American animation respected throughout the world.”