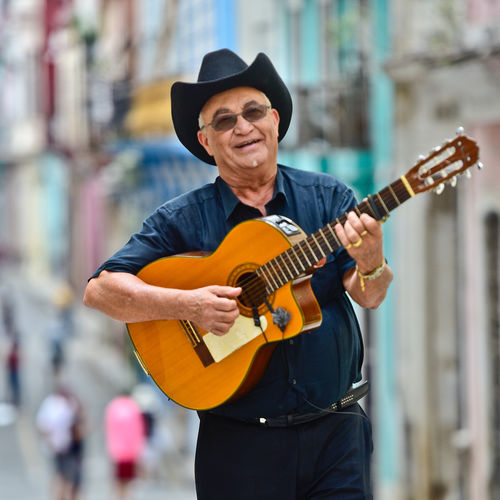 Anyone familiar with Cuban music, knows the song Chan Chan. The Buena Vista Social Club classic has become representative for Cuba all over the world. Its evocative opening melody is recognisable to anyone, anywhere – from Havana to Glasgow; from New York to Madrid. However, what most people don’t know is that this Cuban son was not originally written by the Buena Vista Social Club ensemble. The masterpiece was first conceived by trovador Compay Segundo, who in 1987 took the song to guitarist Eliades Ochoa. Together they wrote a version for Ochoa’s group Cuarteto Patria. This iconic duo would perform the song together at the Casa de la Trova in Santiago – a collaboration which in 1996 led to the adaptation which was to become Buena Vista Social Club’s anthem. Without a doubt, Ochoa’s talent lies in the way he was, and is, able to make traditional Cuban music so popular internationally.

Eliades Ochoa was born in 1946 in Loma de la Avispa, Songo la Maya, into a campesino family. His family was made up of natural musicians and at just 6 years of age, he taught himself to play the guitar, showing his natural gift for all things musical.  His background in el campo meant he grew up with an appreciation for traditional Cuban music, including genres like guaracha, bolero, and son. Growing up in this environment, with siblings that also sang and played, would later be instrumental to the development of his independent style, writing and producing his own music.

In 1958, Ochoa and his family moved to Santiago de Cuba, the second-largest city on the island, where the young musician would go round, guitar in hand, playing songs he heard on the radio. With the arrival of the Revolution in 1959, Ochoa was given the opportunity to participate in a radio programme, initiating his recognition as a professional musician. This would later lead him to establish his own radio programme in 1963 for campesinos called Trinchera Agria. In 1971, he became part of Quinteto de la Trova, and later, Septeto Típico Oriental and around this time, was also officially accepted to Casa de la Trova.

In 1978, musician Francisco Cobas Lao offered Ochoa the opportunity to become part of Cuarteto Patria – a group which has been representing traditional Cuban music for decades. Ochoa added his own character to Cuarteto Patria; his unique style as a guitarist gave the group a new edge. However, the guitarist’s fame and recognition reached new heights after participating in the project Buena Vista Social Club, alongside other musical legends like Compay Segundo, Manuel Mirabal, Raul Planas and Ibrahim Ferrer.

Buena Vista Social Club  was created in 1996 and consisted of an ensemble of renowned musicians, with the aim of revising pre-revolutionary Cuban music. The group was named after the members’ club of the same name in the Buenavista quarter of Havana – a popular music venue during the 1940s. They covered popular styles of the pre-revolutionary era, including genres like bolero, son and danzón and recruited dozens of Cuban music legends, even previously retired ones. The group’s album – which included  Chan Chan – was released in 1997 and was an immediate international success, winning the Grammy for Tropical Music that same year. The release of the album was followed by an Oscar-nominated documentary film, directed by Wim Wenders, which covered performances in Amsterdam and New York and interviews in Havana.

This music project, of which Ochoa was such an instrumental part, created a revival of interest in Cuban music, and Latin American music in general, all over the world. Buena Vista Social Club almost became a brand label for the “music golden age” between the 1930s and 1950s in Cuba. Indeed, Ochoa’s work has consistently aimed to export Cuban music to the rest of the world, spreading his love for traditional Cuban folk music everywhere, both with Buena Vista Social Club and as a solo artist. To this day, the acclaimed guitarist continues to tour his music internationally, with his famous eight-string guitar and cowboy hat. He has become an ambassador, a legend, and a symbol for Cuban culture and music.

“Eliades Ochoa: From Cuba to the World” will be showing on Saturday 14th November at 7:30pm for our Cuban Legends Double Bill.

One Reply to “Eliades Ochoa: Taking Cuban Music to the Global Stage”