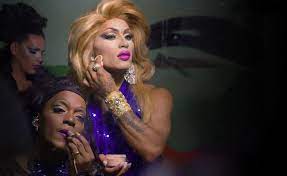 One of the most remarkable films we’ve ever shown at Havana Glasgow Film Festival, and one that got the best audience reception, was Rebecca Heidenberg’s Queens of the Revolution, a documentary about a revolutionary LGBTQ+ centre in Cuba that focuses on the history of trans people on the island. It’s customary for films to receive a round of applause at festivals; this had the audience clapping and cheering long before the credits rolled, due in part to one particularly defiant drag act standing up to violence.

The film is a unique document of El Mejunje (Spanish for ‘mixture’ or ‘concoction’) which was set up by Ramon Silveria in the city of Santa Clara, – which, coincidentally, was the decisive location in the Cuban Revolution – as the island’s first LGBT cultural centre in 1991. This idea was revolutionary for the times, a space for everyone – not just queer people, but straight friends and potential allies – to freely mix and express themselves without fear.

Cuba, like all countries, has long had a conflicted response to its queer population, which is powerfully conveyed in the film, through oral histories conducted with the protagonists, who speak powerfully about their experiences of being persecuted for their gender non-conformity against the backdrop of a macho society. Castro’s revolutionary project sought to create a ‘new man’, but that new man would be formulated within the strictures of conventional gender codes , and there could be severe penalties – including incarceration and conversion therapy – for those who deviated from ‘the norm’.

One of the most striking aspects about the film, and the testimony of the Queens themselves, is the manner in which they still stay loyal to their identity as Cubans, and to the ideals of the Revolution, despite all that they have suffered. Cuba today is one of the most liberal Latin American countries for LGBTQ+ people to live in, with one of the highest levels of trans visibility in the world, and trans health care officially available. However, the reality of life on the ground isn’t so rosy, as the film demonstrates, with transphobia still lurking, partly driven by a resurgence in Christianity on the island.

These problems aren’t specific to Cuba, of course, as authoritarian regimes clamp down on newly-gained freedoms worldwide. Queens of the Revolution, with its conception of the revolution of daily life as an ongoing project, has much to say to us as well, as the UK is currently being dragged into a moral panic over these issues as part of a larger culture war.

We spoke with the film’s director Rebecca Heidenberg ahead of bringing the film back to Scotland for a mini tour.

HGFF – What was your initial interest in making a film with a Cuban subject?

RH – It was really learning about El Mejunje that drew me into the film—it’s such a powerful, incredible space and I was really intrigued by the idea of diving into and learning about what it was actually like.

HGFF – How did you discover El Mejunje, and what do you think its importance is in Cuban culture?

RH -Kristen Brown, who worked on the film as a DP, had been introduced to the space through members of the punk band Adictox. She was working with a Canadian organisation that was bringing instruments to musicians as they can be extremely hard to access. Through that work, she met them and they brought her to El Mejunje. They perform in the film with Juana. She came back from this trip and I was in graduate school studying film and was looking for a subject. I was immediately intrigued. I think El Mejunje has played a huge role in Cuba and continues to be a very important space in the country as well as in the hearts of those who have left.

HGFF – How is El Mejunje regarded by the town of Santa Clara, and how does it fit in?

RH – El Mejunje offers so many opportunities for different types of people of all ages and backgrounds to feel at home there, so I think it really is kind of the heart of Santa Clara. From kids’ shows on Sunday mornings with clowns and other performers to live music and dancing Sunday afternoons with older folks, hip hop, spoken word, punk shows, art shows and everything in between, it has a huge reach and is really driven at its core by an incredible ethos of inclusivity and openness. Even as a foreigner, I was immediately welcomed and felt at home.

HGFF – Ramon Silverio comments that El Mejunje is an ongoing revolutionary project, like the Cuban Revolution itself. What are your thoughts on this?

RH -Silverio is a very firm believer in the core ethos of the Revolution and so are most of the subjects in the film. I think this is a very important point that many people find hard to swallow – they see only the failed parts of the Revolution and do not see any possibility in it and frankly can’t understand how any Cuban would support it. For Silverio, he acknowledges how they have failed but believes that they must keep changing and growing while maintaining the ethos. What he has built with El Mejunje is kind of a microcosm of the utopian vision of Revolution that fails on a larger scale. At El Mejunje, while he is the director, he is extremely humble and has no interest in power or money, so many of those ideals that are destroyed by politicians can survive at El Mejunje. Of course there are still problems, but as he says, it is an ongoing project.

HGFF – While filming the centre, your focus shifts to the role of the trans people there – how did this occur, or was it a conscious decision?

RH – Their community was always going to be important to the film but it was really in post-production that it became clear it had to be the focus. We filmed many, many people that we were sad to cut from the film but in the end, we had to narrow the focus.

HGFF – One of the most surprising aspects of the film is how devoted the Queens are to Cuba as a country, and the role of the Revolution, despite the suffering they have endured. Why do think this is?RH – Yes, there is a deep love of the country. That said, some people did end up leaving in recent years. I think that there is a stark contrast with what’s understood about the way of life in the United States for example, and that particularly in El Mejunje’s community, the notion of collectivity is really vital and important. For them, that is also Cuba. You do sense that collectivity – it is how we made the film. So many people jumped in to support the film and we all worked together to make it happen. I think Joel says it so eloquently when he talks about staying—it was really hard but they stayed and changed the country. From the outside, we see it sometimes as so black and white but in reality, it’s not like that. It’s very complex and there is so much beauty in Cuba, it’s an incredible place.

HGFF – The interviewees speak very candidly about their – sometimes harrowing – experiences. How easy was it to get them to open up?

RH – I never forced that. It was really important to build trust and real relationships with people and then I never asked questions that directly asked people to reveal anything. All of the interviews were done with open-ended questions only so that the subjects could guide and shape their own narrative. I think that given the space, most people do want to share their story. People want to be understood, but it has to come from them.

HGFF – I know that last time we spoke, the Queens hadn’t seen the film. Have they seen it yet, and if so, what was their reaction?

RH – Unfortunately, not yet, but Eirene (Houston, HGFF’s director) is working on bringing it to Santa Clara so hopefully that will happen soon!

HGFF – Trans rights are the focus of intense debate at the moment, and coming under attack in the US and UK. What do you think this film can teach about Cuba can teach us in the Anglosphere?

RH -For me, one of the most important aspects of the film is that it is kind of a study of this incredible space that made a real impact on the larger culture and legislation too.I think El Mejunje can be viewed as a template, and its community members as role models. For me, I think the most powerful changes happen on a small scale, face-to-face, and then grow and expand. It also teaches us that community and perseverance are the keys to change.