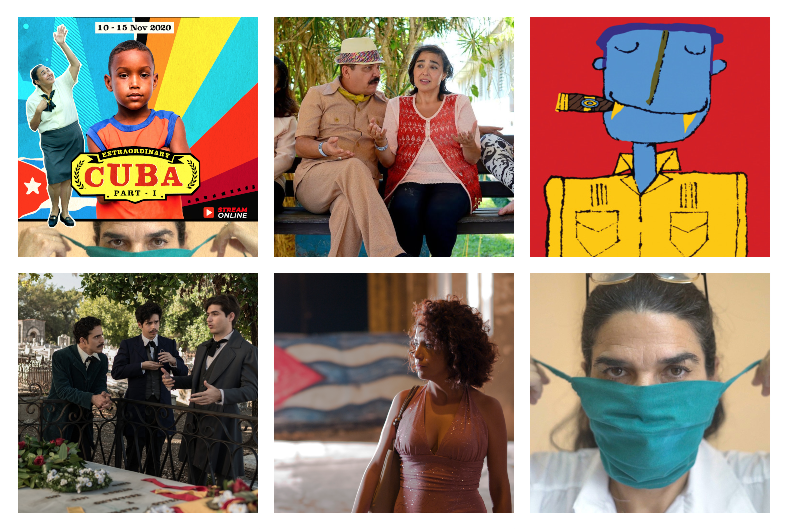 2020’s been a challenging year for all of us, not least for film festivals, which have had to find new ways in which to showcase work and engage audiences. A festival like Havana Glasgow Film Festival feels this especially keenly, since the festival exists to foster links between two cities, two countries and two cultures, bringing Cuban films and filmmakers to Glasgow to meet audiences in a non-hierarchical fashion and, ultimately, to create a sense of community. It’s also a festival that likes to party, preferably with a mojito near to hand.

However, 2020’s digital iteration was a total success, which managed to grow new audiences who would never have been able to manage to make it to Glasgow in November. These issues would come to the fore in a discussion between festival director Eirene Houston, myself and the filmmakers in discussion following the opening screening of Cuba: Living Between Hurricanes, a documentary by the foremost expert in English on Cuban cinema, Michael Chanan, in collaboration with historian Jean Stubbs. Visiting Cuba in the wake of Hurricane Irma, the film takes a suitably materialist, discursive approach to Cuban history and society, tracing how the island’s destiny has been affected by the exploitation of crops from coffee to tobacco to sugar.

The film then goes on to examine how tourism has supplanted these industries today, and look at the island’s unique strategies to deal with climate change in a wide-ranging film that foregrounded both the island’s geographical and social precarity, and the Cubans’ ingenuity and tenacity in the face of these circumstances.

One of the most missed faces at the festival was Hugo Rivalta, one of those rare people who makes you feel better by his very presence in a room. He did pop up from Havana in the festival’s online intro, where he especially recommended Nosotros La Musica, (which would kind of translate as We Are the Music) which wasn’t a bum steer. This classic documentary from 1964 was the first film of prolific documentarian Rogelio Paris, and was a joyous celebration of popular Cuban music in the early 60s, serving as a snapshot of and showcase for the diversity of musical styles and expression.  A particular revelation for me was Bola de Nieve, a spectacular performer who comes across like a camp, Cuban Louis Armstrong, and burns up the screen.

Another documentarian who explored music and Afro-Cuban culture was Nicolás Guillén Landrián, though he would take a much more confrontational approach, one that would bring him into conflict with the authorities. If Bola de Nieve can joyfully sing “All the Blacks drink coffee”, Landrián can use virtually the same line with bitter irony in his blistering deconstruction of a propaganda film Coffea Arabiga. Commissioned as a short in 1968 to promote a coffee harvest around Havana, Landrián produced a film that was dialectic rather than didactic, exploring inequalities in Cuba along the fault lines of gender and race, with spectacularly ironic use of The Supremes You Keep me Hangin’ On and The Beatles’ Fool on the Hill, the latter synchronised to an appearance by Castro. To add injury to insult, the coffee harvest was a failure; Landrián would find himself imprisoned, then sent to a psychiatric hospital before eventually leaving for the US, where he would make his final film, Inside Downtown, also screened by the festival. While this was a more informal affair than the poetic films which made his reputation, and shot on low grade video, it demonstrated an equally acute eye for contradictions in American society as it met up with exiled Latin American artists of his generation.

Accompanied by a short featuring an extended interview with his widow and some of his compatriots, these films provided a rich springboard for a discussion of his legacy, which after being suppressed for decades is now seeing his work being restored and reappraised as probably the richest documentary work in Cuban cinema.

One of the Cuban filmmakers who recognised his brilliance and kept Landrián’s legacy alive was Humberto Solas, who would produce another of the most controversial films in Cuban cinema history, Cecilia. The controversy arose because the film is based on Cirilo Villaverde’s Cecilia Valdés, the most famous Cuban novel of the 19th century, indeed sometimes regarded as the national novel. I would argue that the problems arose not because of any liberties Solas took with the plot, tracking the rise and fall of a young mulatta against the Wars of Independence and the end of slavery and colonialism, but with the film’s style. If the novel is naturalistic, the film is flamboyantly melodramatic, but for a purpose. Beginning with a hallucinatory opening contrasting Catholic religious rites with creation myths from the Afro-Caribbean religion Santeria, the film purposely uses the form of melodrama to expose the hypocrisies of a society where out titular heroine is basically pimped out by her family in a doomed attempt to enter the aristocracy.

As a young man, Solas had been impressed by the work of Italian aristocratic Marxist filmmaker, Luchino Visconti, and even spent time in Italy. This film sees him work through that style and beyond; if Visconti seems more than half in love with the luxury he professes to overturn, Solas turns the lavish production design and 360 degree pans to the max to expose the artifice of colonial society as an illusion, if not a hallucination.

This is exemplified in one incredible scene where the aristocrat Leonardo exposes what’s behind the curtain to his fiancée Isabel, showing her the realities of slavery underpinning their lavish lifestyle, and the film shifts from Visconti-style melodrama to something more resembling an Italian cannibal-style gore film in its graphic horror. Ironically, given the controversy the film generated in Cuba, this scene appears to have actually been censored in the UK, despite acting as the fulcrum of the film. Kehinde Andrew has acutely written about ‘the psychosis of whiteness’ in relation to Anglo-American films concerning slavery; I can think of no other film on the subject that so explicitly illustrates and skewers the ‘psychosis’ which he adresses.

If these films seek to exonerate the US and UK’s role in slavery, and present them as progressive, Cecilia is under no illusions. While the characters are theatened by the end of the slave trade, and criticise the UK for its role, they are clear that the UK is motivated by economic, not moral reasons. Another link between Cuba and the UK – specifically Scotland  – was provided by Felix Flores Verona, a Cuban academic living in Scotland, who demonstrated Sir Walter Scott’s influence on the source text. If only Scott had enjoyed such a radical cinematic adaption of his work…

If the legacy of slavery and colonialism has been one of the major stories of the year, the other has, of course been coronavirus. This was explored in a series of documentaries looking at the island’s unusually successful attempts to control the virus, and the country’s internationally famous health services. Life – and death, from other causes – continue to go on of course, and the most significant Cuban loss of the year was that of Juan Padron, the island’s beloved animated filmmaker, who occupies a position akin to Miyazaki’s in Japan. His son, Ian, joined the festival for a celebration of his father’s work, which he was extremely grateful to do – due to coronavirus restrictions, tragically, he’d been unable to travel for his father’s funeral.

The festival screened his eternally popular kids’ cartoon, Elpidio Valdés, about the moustachioed mambi fighter in the Spanish Wars of Independence – yes, his surname is a tip of the hat to Villverde’s tragic heroine – alongside his cult classic cartoon, Vampires in Havana. This film would be another of the most controversial Cuban films of the 80s, as ICAIC believed cartoons were for kids, and should have a pedagogical function. Vampires, with its bawdy, un-PC humour d against a vivid background of Batista’s dictatorship in the 30s. When it was eventually released, it proved a massive hit, luring in adults and kids who snuck in despite its rating, vindicating Padron. Seeing it again now, its zany plot of vampires and vampire gangsters battling against each other to find a vaccine for their condition, to allow them to go to the beach and bask in the sun, took on a new relevance.

This edition of Havana Glasgow Film Festival was undoubtedly a success, one that successfully rose to the challenge of producing a festival in such unusual conditions, and found new audiences in the process. Hopefully, we’ll have found our vaccine in time for next year’s edition, and can return to the cinema and bask in the light projected from a screen in the darkness.