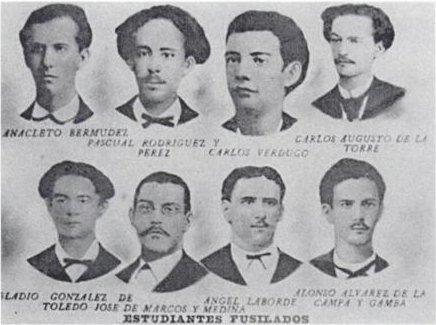 The Cuban Wars of Independence were a long, protracted struggle with much blood shed. But one of the most appalling incidents occurred during the first, Ten Years War, in 1871, when eight Cuban medical students were executed for crimes they didn’t commit.

That November 24th would have been an ordinary day except that the student’s anatomy lecturer was late, so some students wandered off to Espada Cemetary. There they played pranks like riding on the wagon that brought corpses to their anatomy class, but the Spanish guard on duty landed them in it by falsely alleging that they had desecrated the tomb of a Spanish journalist.

The boys, aged 16-19, alongside members of their class, some of whom had been nowhere near the cemetery, were all arrested and charged with the offence.

Within three days the boys had been sentenced to death. That same afternoon, the students who had been chosen to be killed were led to the espalanade in La Punta, each holding a crucifix in their bound hands.

Literally forced to their knees, with their backs to their executioners, they were shot in pairs by firing squad.

To rub salt into the wounds, their corpses were taken outside the city and thrown into a common grave.  Their families were never allowed to reclaim their bodies, and their death certificates never recorded.

The rest of their class were also unjustly punished. 11 were sentenced to six years in prison, 20 to four years, and four to six months. All of their possessions were made subject to civil liability.

The severity of the punishments were intended by the Spanish Crown to emphasise their strength, and the ruthless action they would pursue to retain their dominance. However, their actions may well have backfired.

Even at the trial, defence lawyer Frederico Capdevila would performatively withdraw his sword and break it over his knee in protest. This gesture would see him removed from his post.

Ultimately, the atrocity would only serve to strengthen the Cuban people’s resolve to free themselves from colonialism.  Cuba’s national poet, Jose Marti, was only 18 when this miscarriage of justice was perpetrated, but would be marked by it and helped commemorate the date of 27th November on the Cuban calendar. To this day, medical students gather at the steps of the University of Havana and march to the memorial commemorating where the murdered students fell.

Alejandro Gil’s film Inocencia, dramatising the fates of the students, will screen at Havana Glasgow Film Festival on Thu 12 Nov