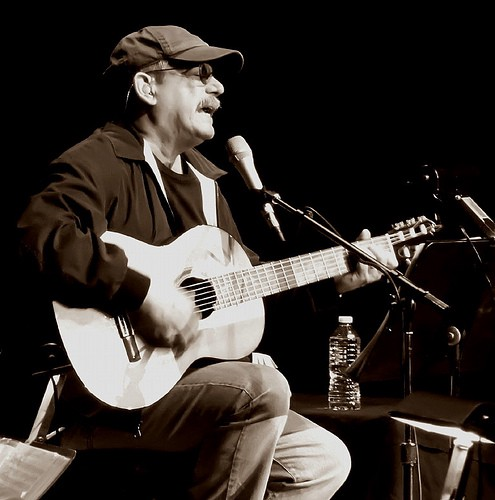 Nobody represents leftist culture in music quite like poet-musician Silvio Rodríguez. Born in 1946 in San Antonio de los Baños, Cuba, Rodríguez became one of the leading figures of the nueva trova (new ballad) movement in Cuban music. At just 13 years of age when the revolution took hold, Rodríguez’s worldview and artistic career was completely shaped by this major transformation of Cuban politics and society. In 2020, he now boasts more than twenty albums and is considered a true emblem of the Latin American left, both musically and politically.

Rodríguez’s enthusiasm for the revolutionary moment in Cuba was shown by his participation in government initiatives such as the 1961 Literacy Campaign, launched under Che Guevara to increase literacy rates in Cuba. As a result, Cuban literacy rates increased from less than 80% in 1958 to 97% after 1961 – one of the highest literacy rates in Latin America at that time. Many youngsters in Cuba played a major role as educators in “literacy brigades” – amongst these, was a 15 year-old Silvio Rodríguez. In the documentary “Silvio Rodríguez: Mi Primera Tarea” (“My First Calling”), the songwriter fondly and nostalgically recalls the time he spent teaching a rural campesino family to read and write for the campaign. It was also during this period in his life that a friend taught him how to play the guitar.

Guitar-playing began to take a major role in his life while he was doing military service in the army in 1964. A few years later in 1967, Rodríguez had his first television appearance, increasing his popularity, especially amongst young, revolutionary Cubans. The cultural institution Casa de las Américas soon became his home and it was here that he met Pablo Milanés and Noel Nicola. Rodríguez, Milanés and Nicola were soon to become the most emblematic singer-composers of the nueva trova.

The nueva trova movement emerged in Cuba in 1968. Having its roots in traditional trova music, it was greatly influenced by the country’s revolution and subsequent political and social changes. It tended to combine folk music with progressive, often political, lyrics which addressed issues of social injustice, racism, colonialism and sexism. It is within this musical context that we situate Rodriguez’s symbolic, eloquent lyrics which often explore and combine ideas of romanticism and idealism with revolution and existentialism.

In 1969, Rodríguez worked as part of the crew on the fishing boat Playa Girón – a highly productive period in his life which saw him write 62 songs in just under five months, including the famous “Ojalá” and “Playa Girón”. In 1976, he joined Cuban troops in Angola to play music for the soldiers, showing the connection the songwriter had conceptualised between music and the revolution.

However, Rodríguez’s music is not just an artistic representation of leftist values; over the years, his work also became an intimate and reflective window into the life of the artist. While his early lyrics capture the trovador’s revolutionary enthusiasm, his work became more self-questioning and introspective in middle age. More recently, his lyrics have explored life as a grandfather, with a particular focus on the topic of children.

Nevertheless, Rodríguez’s status as an emblem of leftist culture and intellect meant his music was always tied up with political positions. He became banned in some Latin American countries with dictatorial regimes during the 1960s and 70s. Ironically, he later went on to play solidarity concerts in some of these countries, such as Argentina and Chile, after the fall of their regimes, as Cuban cultural emissary. Similarly, his visa for the U.S was denied in 2009. After publicly denouncing the suggestions of hypocrisy this had for Obama’s shift in foreign policy towards the island, his visa was eventually accepted in 2010, allowing him to play in the U.S for the first time in 30 years.

At the turn of the millennium, Rodríguez (alongside Ernesto Leucona) was awarded the title of best Cuban composer of the 20th century, showing just how much he means to the Cuban people. The trovador represents the fight against injustice, tyranny and oppression while also exploring what it means to be a liberal, an artist, and above all, a human.

“Silvio Rodríguez: Mi Primera Tarea” will be showing on Saturday 14th November at 9:10pm for our Cuban Legends Double Bill.

One Reply to “Silvio Rodríguez: The Life of a Cuban Legend”