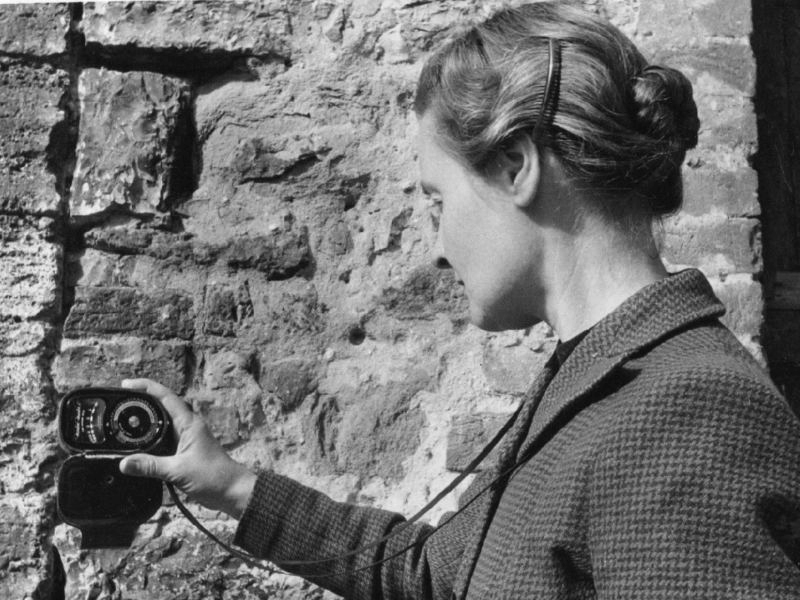 This weekend sees the centenary of the birth of Margaret Tait, a filmmaker and poet who has gone from being one of the most marginalised Scottish filmmakers, working on the periphery, to being regarded as a crucial figure in Scottish cinema’s development – indeed, the greatest Scottish female filmmaker. The reasons for her neglect and rediscovery aren’t hard to ascertain; a fiercely independent, uncompromising figure who refused to compromise, she developed a poetic form of personal cinema that was completely beyond what was going on in Scotland, and more in tune with the international avant-garde.

Having trained as a doctor, she went on to study film at The Centro sperimentale di cinematografia in Rome, Italy then being conceived to be at the cutting edge of cinema, through the work of the Neorealists.

Her own work would quickly progress beyond Neo-Realism to search for higher, more poetic, subjective truths. Her first major Scottish film, A Portrait of Ga (Tait’s mother) would bring intimacy and humour to its subject, an approach she would further develop in Hugh MacDiarmid; A Portrait where she would humanise the normally stern Scottish poet.

She would set up her own production company, Ancona Films, named (significantly) after the street she lived in whilst in Rome, and screen her films alongside others in her Rose Street Film festival in her flat.

Filming her domestic surroundings, paying close attention to the quotidian and things that other filmmakers would neglect or elide, her films can at first glance seem like films about nothing, almost inconsequential. But the more one immerses oneself in them, and sees how they fit into a unified poetic vision of the universe, they grow to be more than the sum of their parts.

It was only a matter of time before she attracted the attention of another Edinburgh figure trying to escape the stifling confines of Scottish culture of the time, Edinburgh gallerist and impresario Richard Demarco, who would organise the first retrospectives of her work – indeed, they were neighbours.

“There was no way I could escape her – from my window in my flat in Frederick Street, I was looking down at her flat in Rose St, 91. So her world was Rose Street, my world was Frederick Street. She knew more or less by instinct what I was doing”, Demarco told me.

While Tait was known as a filmmaker, and courted by dour doyen of Scottish documentary John Grierson, Scottish filmmaking of the time was largely concerned with industrial subjects, films about tartan and tweed, in which Tait had no interest. However, her maintenance of her independence would cost her. As Demarco notes, “Tait was someone who was rejected by the Scottish art world, only three of her films were properly funded. She had to make do and mend, as it were, reuse and repair old film. At the time I was dealing with her, the late ‘60, the ‘70s, I was director of The Scottish Educational Trust, which was funded by Sean Connery. I wrote to Sean asking for £3000 – she needed it desperately to buy materials, to buy film, but I don’t think he ever replied, because I don’t think dear Sean would have understood the kind of film she was making.”

Demarco is scathing about the reasons underlying this; “Most people in the film world are visually illiterate – they’re telling a story. Margaret never told a story.”

The closest Tait came to telling a story was in her first, and last, feature, indeed the first feature made by a Scottish woman (as late as 1992) Blue Black Permanent. Demarco was at the premiere at Edinburgh film Festival, as, indeed, was American pulp master Sam Fuller, who instantly ‘got’ it and proclaimed it ‘poetry’.

Demarco is adamant that “The two great Scottish artists of the latter half of the twentieth century – the two great Scottish artists who weren’t Scottish, but European – were Tait and Ian Hamilton Finlay, who has been more successful in being taken seriously after his death.” Interestingly, as well as both being both recognised abroad rather than at home,Tait and Hamilton Finlay use landscape as a metaphor for human existence.

Indeed, Tait’s Orcadian background would become increasingly central to her work, prompting her to move there, and, in the process, marginalise herself further. As Orcadian poet and literary historian Morag MacInnes notes, “Orkney was fundamental to her work. Indeed, she used it, as artists to, to create a persona, something distinct from the urban world she was living in and learning in.

“Her poetry and film are intimately linked – she was a fan of American Transcendentalists, and Walt Whitman – she liked Imagists, sudden jumps from one picture to another – she likes surrealism and oddness. Most interestingly, from a modern perspective, she responded to poets who looked at science from a romantic point of view (very Victorian, really) – she was one of the first women to try and make a drop of water both a scientific event and a poetic one.”

While she may have felt intimately linked to the land and the people, the feeling wasn’t entirely reciprocated.

“She didn’t fit into the community, unless artists can fit into farming /fishing communities. She preferred, I suspect to be outside/above/ distant from the objects she was paying attention to. My father Ian MacInnes was a contemporary of George Mackay Brown’s, a marine artist who illustrated G M B’s books and painted the Orkney landscape. They knew her and her work and didn’t understand it. So they kept their distance! He and GMB found Margaret a complex and rather alarming character. Perhaps sexism, of course (who does she think she is – and what does she think she’s doing?) but also – a different tradition from both of them.”

However, her influence was growing further afield. German experimental filmmaker Ute Aurand became aware of her work through its promotion by the London Filmmaker’s Co-Op, and would programme Tait’s work in her monthly Filmarbeiterinnen-Abend at Berlin Arsenal, as well as other major German cities. Aurand notes, “Some people were enchanted, loved it, others not, so it is with this kind of cinema, but over the years the interest has increased. In 1995 we bought six of her films for Arsenal distribution, later also Garden Pieces, her last film.”

It is little surprise that Aurand would respond to Tait’s work, her own films being remarkable exercises in portraiture. “I appreciate her individual honest way of making films, she makes the films the way she wants to make them. Already in her very first films, you see her courage, in the early ‘50s no-one made this kind of personal intimate cinema. And her editing is unique. She once said to me ‘There is no difference between my short films and Blue Black Permanent – it is all the same!’ Even if I can’t agree fully, I understand completely what she means – her intention, her way of looking at the world is THE SAME.”

Aurand would visit Tait in Orkney in 1995; “We watched other films in her home, which were not in distribution in London…it was a real treasure.” Indeed, while recognition of her work was growing, she would be resistant to gallery screenings, preferring to have her films projected on film rather than video. She was also stalling over her last film, Garden Pieces; “I think my visit encouraged her…when she showed me unfinished footage, especially the scratched parts in bright colours which became later the middle part of Garden Pieces, I loved them! Margaret said, the film is not completed. But she also took out her Bolex and we started filming her Poems of the Nineties. Filming together out in the Orkney landscape set things in motion, she hadn’t touched the Bolex for years because of focusing on her 35mm feature…so shortly after my visit she completed Garden Pieces, with the last part Grove newly filmed.”

As artists’ cinema has grown in prominence, and narrative increasingly becomes the province of TV rather than cinema, Tait’s work has become much more widely appreciated; indeed, the annual award for artists film in Scotland, awarded by LUX Scotland, is named after her. To celebrate her centenary LUX have commissioned artists to make films in response to her work, the first of which will be made by the most significant contemporary Scottish artist/filmmaker, Luke Fowler. He says of her, “Tait is a complete legend for me, she pioneered a type of poetic cinema that has still to be fully digested by audiences and critics alike.

Her roaming camera, rhythm of editing and relationship between (her) voice and image are masterful.

I find it sad that Margaret did not receive more recognition during her own lifetime. Thankfully the efforts of Sarah Neely, Peter Todd and Ute Aurand are attempting to address this.”

With a major exhibition at GoMA in Glasgow and a variety of screenings from Orkney to Glasgow to Berlin to celebrate her legacy this weekend, it feels like Tait’s time has finally come. Although Richard Demarco thinks we should go further – “I want a permanent national museum!”