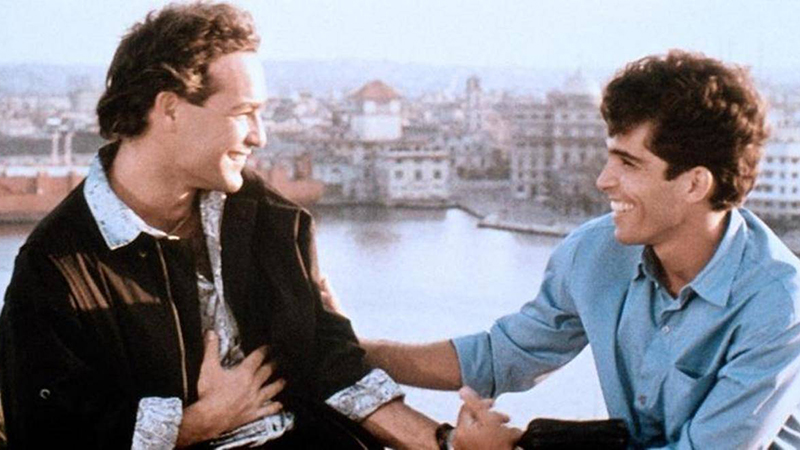 This Oscar-nominated groundbreaking film tells the story of two men – one gay, the other straight, one a fierce communist, the other a fierce individualist, one suspicious, the other accepting – and how they come to respect each other.

Based on the short story “The Wolf, The Forest and the New Man” written by Senel Paz in 1990, Fresa y Chocolate takes place in Havana, Cuba in 1979. Diego (Vladimir Cruz) is a flamboyant, gay artist unhappy with the Castro regime’s attitude toward the LGBT community as well as the censored conceptualization of culture. He spots young David at an ice cream shop and sets out to woo him. “I knew he was a homosexual,” Diego later reveals to his roommate Miguel, “there was chocolate and he chose strawberry.” Miguel uses David to spy on Diego,  whom they see as a counter-revolutionary, dangerous to the Communist cause. David becomes fascinated, however, by the quirky, educated, and cultured Diego and they gradually begin to respect and love each other.

The film’s serious and sensitive treatment of gay characters is set during a period in the country’s history when anti-gay sentiment and discrimination ran especially high. For Alea however, it is more a film about tolerance than it is a call for gay rights. Fresa y Chocolate examines freedom of expression, surveillance, revolutionary watchfulness, the black market, and the flaws of revolutionary Cuban society. The film’s impact, however, was to  liberalise Cuban attitudes towards homosexuality. Following the decriminalisation in Cuba of homosexuality in 1979, this film critiqued  homophobia in society, even leading to a personal apology from Fidel Castro for incarcerating gay people.

Alea, 69 years old at the time of the shooting of Fresa Y Chocolate, became ill and called upon his long-time colleague, filmmaker Juan Carlos Tabio, to complete the film. (222 words)